Located in the Nervion Valley, this is one of the gateways to the Gorbeia Natural Park; set up in 1994, it is the largest protected natural area in the Basque Country. The Gorbeia mountain (1,481m) is one of the area’s outstanding landmarks and the mountain, once considered sacred to the Basques, and its surroundings can boast much unspoiled nature and spectacular landscapes. The area also features several archaeological sites.
At Itxina, in the heart of the Gorbeia area, is the Supelegor cave. It has long been associated with the Basque goddess Mari and was reputed to be home to witches and lamias, who, on stormy days, would meet at the cave’s entrance around a fire. The Eye of Atxulaur, at one of the entrances to this limestone massif, is another curious site to see here.
For those who prefer to stay in town, Orozko has more accessible attractions, including its interesting historical heritage. Here you can find the churches of San Bartolomé de Olarte, from 1385, and San Pedro de Murueta (in front of the hotel), a Renaissance construction that houses a 14th-century Gothic sculpture of St Peter and a Baroque painting of Peter’s Denial that dates from the 17th century, making this a rich source of art and architecture. There are also tower houses, like the Aranguren, built around 1500, and the Torrelanda, a 15th-century fortification; and mansion houses (known here as palacios) like the Ugarte and the Palacio de Legorburu, also known as the Kareaga house, which today houses the Orozko Museum.
Orozko has plenty to see, all set in a beautiful landscape of farms and farmhouses, showing that traditional life is still very much alive here.

BILBAO AND THE GUGGENHEIM 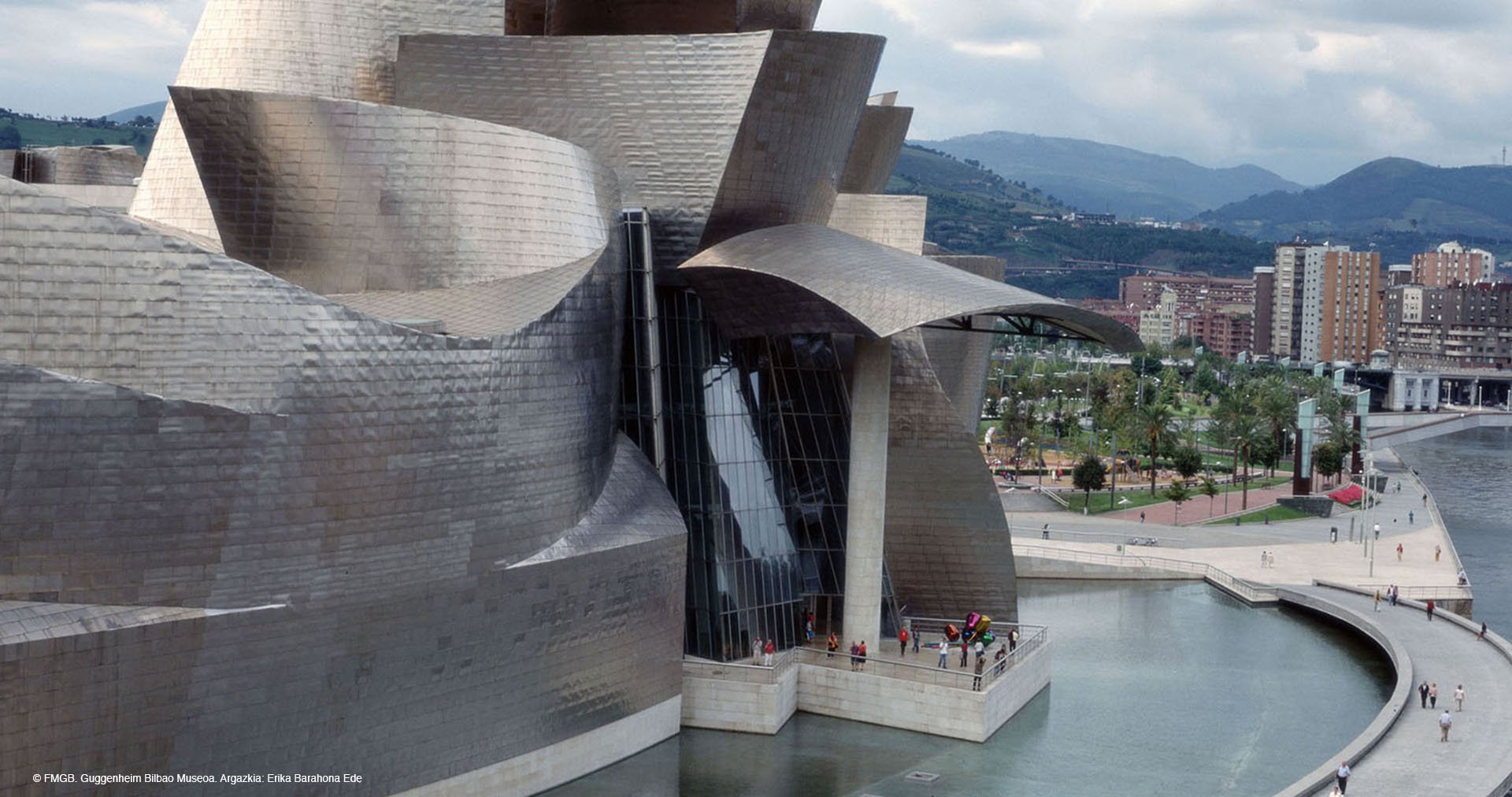 These days it is hard to imagine Bilbao without the Guggenheim Museum, which has become the symbol of this, the largest city in Biscay province. The museum, designed by Frank Gehry and opened in 1997, has given the city back much of the splendour and confidence it had during its golden age. The grey, industrial Bilbao is now a bright, contemporary city that welcomes cultural tourists from all over the world.
The museum was one of the first pieces in the group of new constructions that the city now boasts. Here you can take a stroll and see Isozaki’s towers; Santiago Calatrava’s Zubizuri bridge; César Pelli’s Iberdrola Tower, the highest skyscraper in the Basque Country; and Philippe Starck’s conversion of the Alhóndiga, an old wine warehouse that has been turned into a cultural space. We should not forget Norman Foster, whose “fosteritos” make for curious entrances to the underground railway stations he designed. Bilbao also has some great buildings from the early 20th century, including the art nouveau Casa Montero, built by a follower of Gaudí.
But man does not live by design alone, and a pit stop for some food will be in order, for which we recommend the Casco Viejo (‘Old Quarter’). Here you will find the busy, lively, authentic Bilbao. This area, known as Siete Calles (‘Seven Streets’) has shops and eateries of all kinds and is a great place to stop for a txikito (glass of red wine). This is also where you will find Plaza Nueva, the city’s finest arcaded square. The problem you might have here is being able to leave, since the pintxos served at bars like Sorginzulo, located right on Plaza Nueva, might be too much of a temptation. So sit and enjoy these culinary masterpieces in miniature, and you won’t be worrying about the time.

Declared a Biosphere Reserve by UNESCO in 1984, the Urdaibai area is extraordinarily beautiful. The River Oka, which becomes an estuary as it reaches the town of Mundaka, creates brackish marshes that are heaven on earth for birds.
Urdaibai also offers one of the region’s most beautiful beaches, which can be seen from the Peñón de Ogoño viewpoint.
Mundaka is another of Urdaibai’s beaches, a magnet for surfers who come from all over the world for its famous left wave.

Between Bakio and Bermeo, a town with a very long fishing tradition, is the tiny island of Gaztelugatxe, one of the Basque Country’s most special places. Linked to the land by a bridge and crowned with the little chapel of San Juan, this site is the source of many legends, including ones that tell of its curative powers. Tradition dictates that visitors ring the bell three times, after climbing the more than 200 steps that lead to the summit. This effort is well worth it to enjoy a truly splendid sunset.

The inland areas of Urdaibai also hide their treasures, such as the Santimamiñe Caves, with their important paintings; and the Oma Wood, also known as the Animated Wood, created in 1984 by the sculptor and painter, Agustín Ibarrola, in a way that combines art with the natural setting. Inland, too, is the town of Gernika, the cradle of the Basque political identity. After its destruction by a fire in 1202, Vitoria was rebuilt as a medieval burgh town. Streets such as Correría (‘Tanners’), Cuchillería (‘Knife-makers’), Herrería (‘Blacksmiths’)… all linked to the medieval trades, now make up the heart of the Old Town. Simple craftsmen’s houses were later replaced by mansions and tower houses, which give a monumental character to a city that is now officially recognised as a Historical Town.
Surrounded by its Green Belt, this city, which is very committed to environmental conservation, was made Europe’s Green Capital in 2012. This is a city that is very easy to get around on foot or by bicycle.
A must during a visit to the city is the Gothic cathedral of Santa María, which inspired the writer Ken Follett in his work. Its restoration work, which is open to the public, has led to some fascinating discoveries such as the original main gate into Vitoria (the cathedral formed part of the original town wall). Excavation under the cathedral has revealed the remains of an earlier church, as well as many ancient burials. Probably the best known of the Basque Country’s 3 provincial capitals. La Concha bay, set between the Monte Igueldo and Monte Urgull hills, is an image that is recognisable all over the world, as famous as its famous jazz and film festivals.
San Sebastian offers numerous attractions. The Peine del Viento sculptural group, created by Eduardo Chillida, is another of the city’s musts. Nearby is the funicular railway that leads to the Monte Igueldo hill. For the pleasure of both locals and visitors, this railway continues to work each day with the same equipment and the original wooden cars it used during its inaugural journey on 25 August, 1912. The buildings at the summit of Monte Igueldo were inaugurated in 1911 as a casino, and converted soon after into a funfair. Its original rides are still in place, including the classic roller coaster. The tower, which was built in the eighteenth century as a lighthouse with a flame signal, offers wonderful views of Donostia.
Considered to be the world’s pintxo capital, a culinary route through the old town is an essential part of your visit. Here, each bar is a treasure, a distillation of the city’s atmosphere. From the Old Town, it is easy to get to the aquarium, one of the most visited attractions in San Sebastian; here you can see its 360º underwater tunnel and such curiosities a its right whale skeleton. Laguardia is a well-preserved medieval town, with narrow streets and sections of its original walls still standing. The town is surrounded by wineries, and wine has contributed much to Laguardia’s history. You can find out about winemaking on one of the guided tours that several of these wineries offer, and enjoy some of the cutting edge architecture used to build them.
El Ciego is another of the towns much marked by wine production. There is nothing better than a stroll along its picturesque streets, with their stone houses and palacios.

The name of Salinas de Añana is closely linked to the history of salt production. Its saline springs are mentioned in documents dating back to 822 AD, shortly before the Muslim invasion of the area.
Its foundation as a villa (‘town’) in 1140, makes it the oldest in Alava. It is at this time when the production and sale of salt made it one of the most prosperous towns in the north of the peninsula.
Using the traditional method, the saltworks have created a unique landscape, made up of more than four kilometres of wooden channels that take the salt water from the springs to terraces made of stone, wood and clay, which support the beds where the salt is collected.